The town is a major shopping and service centre with many services including a large modern supermarket, financial services, ATMs, community Telecentre, hospital, dental services, a large modern pharmacy, two hotels and a printing office.

Yorketown is at the junction of five roads leading to towns all the same distance away.  Surrounded by about 200 salt lakes, the town has a history based initially on harvesting those lakes.  Today, the salt crystal formations are a drawcard for photographers.

In the early days, Yorketown was called ‘Weaners Flat’ as it was the place where local graziers separated the lambs from their mothers.  In 1876, the town’s name was changed.  After many suggestions, including ‘Salt Lake City’ after the numerous salt lakes in the area, the name Yorketown was finally givem.

The caravan park is walking distance to the town centre, giving access to shops, cafes, sporting grounds and more.  With only a short drive to beaches and coastal resorts to the east, west and south, Yorketown is ideally situated as a base for exploring Southern Yorke Peninsula.

Booklets to guide you around the town’s historical walk, as well as a booklet called ‘A drive into the past’ will guide visitors to the heritage areas of the district and are available from the Telecentre.  The Telecentre is also home to the Salt Lakes Gallery, featuring local art and craft items.

Up until the early 1900’s one of Yorketown’s old engineering shops was manufacturing windmills of it’s own design, which were seen on plenty of farms locally, and even in other parts of Australia.  One of these windmills has been restored by the historical society and is working in the carpark on the Minlaton Road.

Photos from the past

The Historical Society has over 1,000 photographs depicting the area pioneering days.  This display can been seen in the old courthouse on Edithburgh Road near the town centre on Fridays, 10am to 12noon.

An expansive, modern playground is situated on Weaner’s Flat reserve, on Stansbury Road, a short walk from the caravan park.  There are electric BBQ facilities with and enclosed undercover area.  Public toilets and manicured lawns make it an ideal location for picnics and gatherings.

Situated north of Yorketown is the local golf course, with watered fairways, making the course playable all year round.  A summer competition runs from October to March with visitors welcome.

Find us on Google Maps 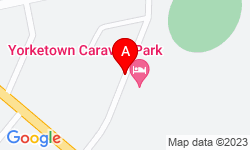 We are pet friendly!